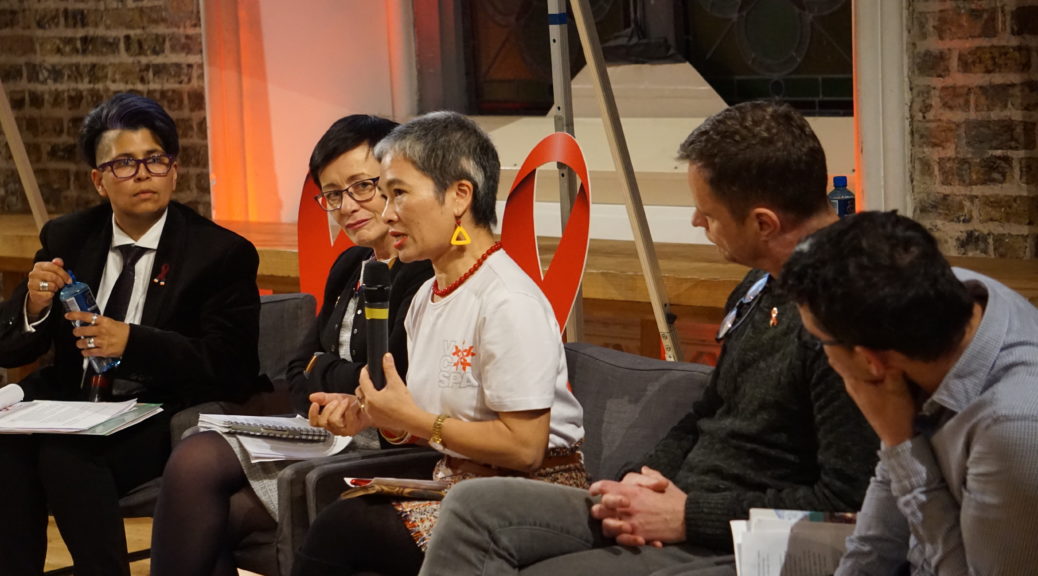 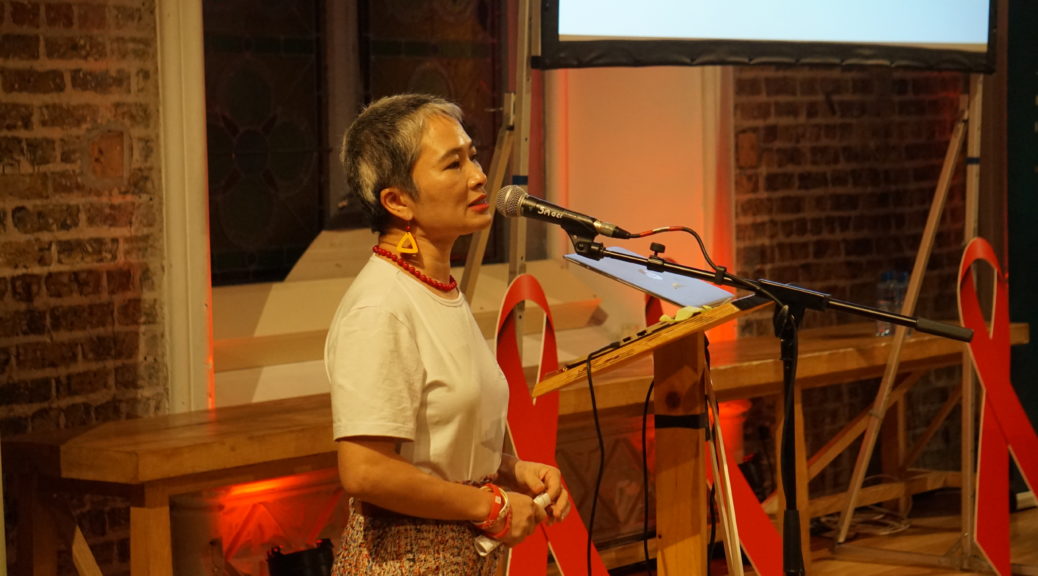 Ciarán Cannon is Minister of State at the Department of Foreign Affairs and Trade with special responsibility for the Diaspora and International Development. He is a TD representing Galway East. Ciarán is formerly the Minister for Training & Skills at the Department of Education & Skills. He was first elected to Dáil Eireann in February 2011.Ciarán was elected to Galway County Council in June 2004, to represent the Loughrea Electoral Area.Following the 2007 General Election An Taoiseach nominated him to Seanad Eireann.

Ciarán is also a strong advocate of the use of technology in education and is the founder of “Excited – The Digital Learning Movement”. He worked closely with teachers and industry leaders to make the case for the introduction of computer science as a subject in Irish schools. He was gracious enough to attend the 2018 lecture and provide an opening address.

Dil is a social entrepreneur and co-founded the mental health support service Insight Matters with her wife Anne Marie Toole. Insight Matters operates out of two centres, one in Mountjoy Square and the second on Capel Street. Along with a team of 55 psychotherapists they provide low cost, inclusive and culturally sensitive psychotherapy and counselling services to over 400 clients per week. Together they hope to “inspire change in self and society.” Dil has just begun her own training as a counsellor and psychotherapist in Dublin Business School.

Alongside her work as a mental health advocate she was a dedicated Social Justice and Mental Health broadcaster and journalist for a decade where she presented the award winning weekly programme “Global Village” on Newstalk 106-108. After her departure from Newstalk in 2017 she began her own weekly podcast “Sparking Change with Dil” on the Head Stuff Podcast Network. Dil is an occasional stand-up comedian and in 2012 she made her debut in Irish theatre in Box of Frogs with Mary McEvoy and John Moynes. She acted as our moderator and general stage host for the evening’s lecture. 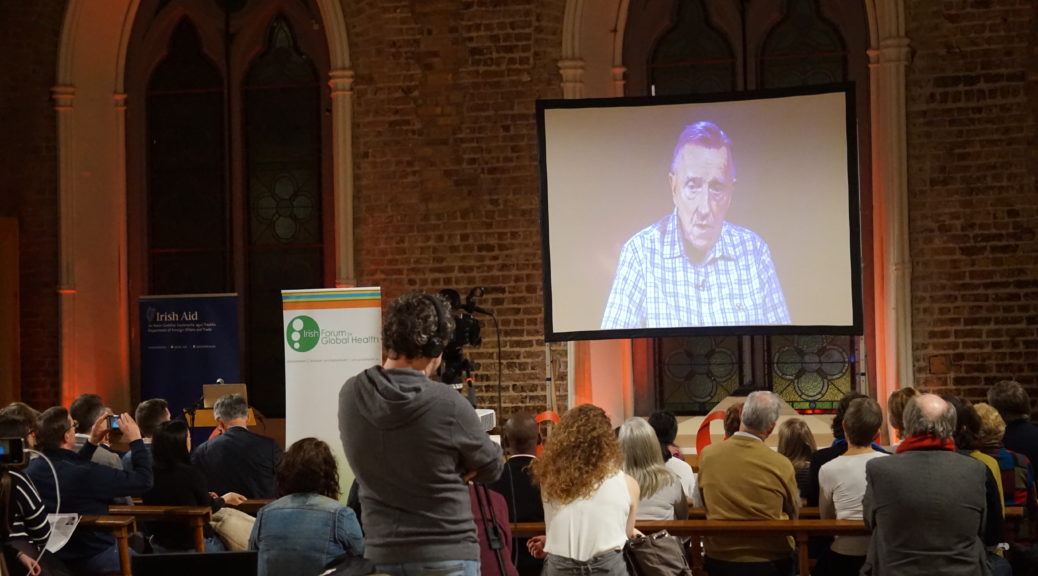 It is with great pleasure that I welcome all of you to this annual lecture-event. Most sincere thanks to every one of you for the interest and commitment you have shown by coming to this gathering in Smock Alley, Dublin’s great historical theatre. Very special thanks to Minister Cannon and Irish Aid, and through them the Irish people, for the annual investment in this event aimed at ensuring that the AIDS epidemic does not slip off either our national or personal agendas. I would also like to pay tribute to the Irish Forum for Global Health for its assioduous work in organising this evening’s event. Heartfelt thanks to Nadine Ferris-France, Nicola Brennan and all of you for you vision and efforts.

With only one principal speaker and a panel to consider issues and answer questions, this year’s programme promises to be a little different from that of previous years. But, as always, you will hear from a wonderful range of personalities. The principal speaker will be Dr. Khuat, a medical doctor from Vietnam, who founded and runs a centre for improving the lives of marginalised individuals through community empowerment and the creation of an enabling environment. Dr. Khuat knows from experience what to do so that people are not left behind, and no doubt she will share some of this with you.

The panel consists of Dr. Khuat, Robbie Lawlor, who was so vitally impressive at this event two years ago, Rory O’Neill, who in addition to being Queen of Ireland is a vigorous anti-HIV activist, and Nicole Brennan, who is well known to almost all of you. The discussion will be moderated by Dil Wickremasinghe, a proud Irish citizen and well-known broadcaster whose passions are social justice, mental health and stand-up comedy. In many ways, Dil epitomizes the thrust of this evening’s event, with her personal belief that equality for one is equality for all.

“Leaving no one behind” is the motto adopted in 2015 by the United Nations for its programme of Sustainable Development Goals (SDGs). Taken together, these goals or aspirations paint a picture of the world we hope to build by 2030. Key amongst them are the elimination of abject poverty, achieving zero hunger, and ensuring good health and well-being for all.

The goal of good health refers to the overcoming the major illnesses that continue to plague the human condition. Prominent among these are AIDS, TB and malaria. For HIV and AIDS, the target is that by the year 2030, which is only 11 years away, the epidemic will have come to an end, with HIV and AIDS no longer posing a health threat in any part of the world. Achieving this poses huge challenges. It means stopping all new HIV infections, every one of them, ensuring that every HIV infected person in the world has access to life-preserving anti-retroviral drugs, and making it absolutely routine that every such person faithfully takes the prescribed medicines every day. Notice the small words “all” and “every”. Stop ALL new HIV infections; get EVERY infected person on to anti-retrovirals; make sure that EVERY such person takes the necessary drugs EVERY day. In other words, leave NO ONE behind.

These are colossal challenges, but they are what the world wants to achieve, what the world intends to do. Reach everyone. Leave no one behind. And when we talk about this in relation to AIDS, thankfully there are good reasons for optimism, though sadly there may be even greater reasons for pessimism. The good news is that because of sustained access to anti-retroviral therapy, the number of AIDS-related deaths is now lower than it has ever been before in this century. In addition, almost 22 million people are on treatment – though the flip side of this great achievement is that more than 15 million HIV-infected individuals still do not have access to the treatment that can save their lives and protect their partners from HIV infection.

But the optimism that these achievements inspire makes it necessary for us to be frank about the hard problems that still need to be solved. And that is what we are aiming to do this evening: identify who it is that is being left behind in the confrontation with HIV and AIDS, get some idea of why this is happening, and see what can be done about it.

As to identifying who is being left behind in the struggle with HIV and AIDS, you have probably guessed right. In every part of the world, it is those who are already marginalised, uncertain, weak and poor who are more vulnerable to HIV infection or to negative impacts of the disease – the economically poor, women, children, adolescents and the young, people of diverse sexual orientation, sex workers, injecting drug users, prisoners.

Then in addition to all these we have the sobering fact that formidable obstacles stand in the way of providing HIV services to the people who need them most. No doubt, the presenters this evening will consider some of these, but let me mention four issues that remain critical.

First, even though women are more likely than men to take a HIV test and to adhere to HIV treatment, gender inequalities and the disempowerment of women, particularly in the case of adolescent girls and young women, remain as powerful obstacles to progress against the disease, and these inequalities are so deep-rooted that they will give way only to very comprehensive and sustained efforts to reduce and eventually eliminate them.

Second, there is the marginalisation and very often outright rejection of people of diverse sexual orientation, exacerbated by restrictive laws and policies, even though such individuals are at a particularly high risk of HIV acquisition.

Third, the world has already started to experience a vast increase in the number of young people, with the largest ever generation of young people entering into adolescence and adulthood. But as we noted last year, all these young people are very vulnerable to infection by HIV and other sexually transmitted infections. And the bleak reality is that we are not doing enough to prevent them from becoming infected or to reach out to those of them who are already infected, as witness by the fact that AIDS is the second most common cause of death among adolescents globally. Tragically, young people feature prominently among those being left behind and the tsunami of their expanding numbers is a stark warning that another devastating tsunami is approaching, that of their becoming ravaged by HIV and AIDS.

Fourth, there is the continued inexcusable spectre of stigma and discrimination. Although these have been somewhat reduced globally, people living with HIV and those at higher risk of HIV infection continue to face these detestable situations, and in a tragic twist they must also endure the self-stigma that may arise from knowing that they are HIV-infected.

Friends, just one month ago the world was celebrating the end of the First World War, the so-called “war to end all wars”. But we know what a mockery that designation turned out to be, with the horrors of all the wars that have taken place in the last century and that continue to ravage the world today. We don’t want this tragic scenario to be repeated in the world of HIV and AIDS, with fresh outbursts of the disease and a resurgence of the epidemic. The world can and must do better. It must reach every person who is in need, whether for prevention or treatment. It must leave no one behind. Failing that, the epidemic will rebound, with disastrous consequences for millions of people. At all costs, we must strive to avoid that.

With these few introductory remarks, let me now give the floor to the speakers and the business of the evening. It will surely be a challenging evening of inputs and deliberations. I wish you well in all of them and hope most sincerely that they will lead to some clearer picture of how the struggle with HIV and AIDS we can leave no one behind and thereby come closer to the ultimate goal of a world free from the threat of this devastating disease.

Finally, Ladies and Gentlemen, let me thank you again for your presence and support this evening. I wish every one of you an interesting although challenging evening; and when it is over, I wish each one of you a safe journey back to your homes.

Thank you. May God bless all of you. And may each one of you and your loved ones have a very happy Christmas.”